To Tail Or Not to Tail!
​That is the question! 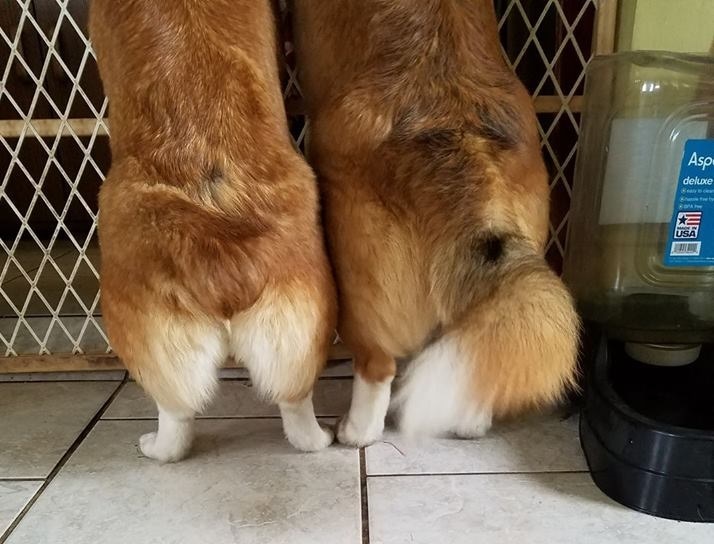 When people think of a Pembroke Welsh corgi they often think of the adorable fluffy bubble butt! Many people are surprised to find out that Pembrokes are usually born with a full length tail. Most breeders dock their tails within the first few days of life to meet the AKC show standard. Some people see tails as a sign of a "lazy" or "irresponsible" breeder. Some even think that if they have a tail they can not be purebred. This is not true at all!

The act of docking tails is actually a rather cruel practice (so is ear cropping but luckily that is not something that has to be done in corgis). In fact, many countries have outright banned the practice with the exception of working dogs, and even then there is some speculation as to whether or not that is needed. In the US, it is expected that a Pembroke have their tails docked in order to be shown in AKC. However, UKC (United Kennel Club) will allow a full length tail in the show ring. Dogs use their tails for communication and balance (they use their ears to communicate as well), so it would be fantastic to see breeders move away from this practice.

I personally will not do it. A ribbon and/or champion status is not worth it to me to lop off an animals body part that serves a purpose. The science does not back ANY reason to do it, even in working dogs, but does point to reasons not to do it.

Why not breed for no tails?

Some Pembrokes are born with natural bob tails. These tails vary in length and appearance. The T-box mutation causes a shortening of the spinal column behind the pelvis, creating a naturally short tail. This is a dominant gene, meaning dogs only have to have 1 copy of the gene to express it. Unfortunately, 2 copies of the gene is lethal. Most puppies with 2 copies die in the womb, although there have been some puppies born with severe defects (there is speculation whether or not this has to do with the T-box mutation or not). Two naturally bob tailed corgis should not be bred together. Since that is the case, there is no possible way to get rid of that gorgeous tail in the Pembroke bloodline!

Since you don't do tails, what about dew claws?

I have my veterinarian do dew claws within the first few days of birth. I understand that there are some people out there that have decided against dew claw removal. I also understand that there is speculation that front dew claws actually serve an important function when it comes to climbing, turning quickly, etc. However, there is not enough science out there backing this yet. I work closely with my vet on all decisions I make and after speaking with them I have decided it is a necessary procedure. I will admit, I have had dogs with both front AND back dews with no issues. So if I went strictly off my personal experience I would say it isn't necessary. If you speak with my vet though, that is a different story. They see many dew claw injuries.

If more science comes out that shows that dew claws serve an important function, then I will gladly stop doing it! I hate hearing them scream when it is done (and their momma does too!!). For now though, I have to do what I think is best, and that is remove them!
Proudly powered by Weebly